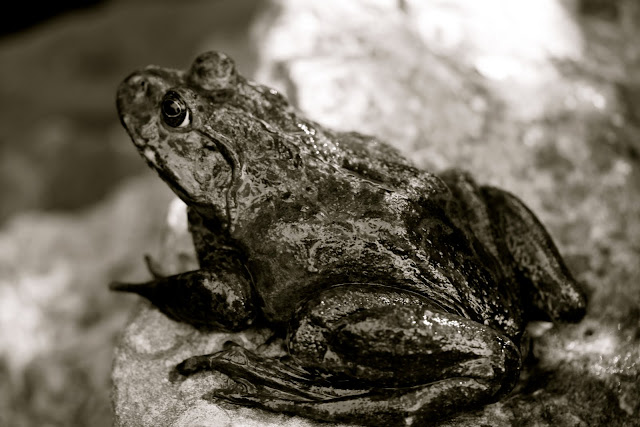 When my brother was visiting last week we took a trip to The Great Wall, an international grocery store filled with interesting food items.  They also have amazing fruits and vegetables at great prices.

At the back of the store in the meat section they have live fish, live eels, live turtles and live frogs.  It breaks my heart to go back there and usually I avoid that part of the store; although sometimes I am just curious enough to view the assorted body parts, such as chicken feet, that are sold in styrofoam packages.  On this particular day, my brother, niece and son invited me to look over the live bullfrogs and choose which two I would like to liberate - to buy by the pound and take home to my pond.

The tiny container where the enormous bullfrogs were kept did not allow space for them to move about, much less swim.  It was sad to peer in, knowing only two would be saved.  Some did not look very healthy or even alive, but the two I chose were quite awake and seemingly not damaged in any way.  My brother dealt with the butcher who put both of them into a small paper bag.

I held the bag in my hand and as my warmth began to reach the frogs, the bag began to jiggle.  By the time we got to the checkout, they were bouncing about in the bag, trying to come out of the folded-down top.  We put them on the conveyer belt and the bag moved up and down and the top started to open a bit, a frog appendage attempting to reach the open air.  The checkout clerk made a gasping noise and put her hands to her face.  She did not know what to charge us and had to find out the frog price per pound.  I tried to explain that we were not going to eat them but instead to liberate them.  She didn't care.  She wanted those frogs off of her space, all two pounds of them - BIG FROGS!

Because frogs are wet and they pee everywhere, we decided to put the paper bag inside of a plastic one. It still gyrated as it sat on my brother's lap on the way home.   Soon they would be free, ready to face the wilds of the backyard and the challenges of life in the pond. 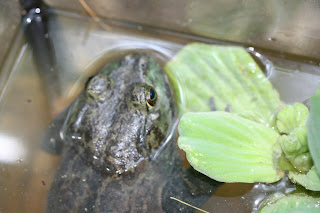 My eldest wisely was concerned about possible contamination of the existing pond inhabitants and we decided to put them in a large aquarium, filled with about 8" of water, a log and a couple of floating plants.  They had room to swim about or climb out to dry on the log.  Most importantly, we put an antibacterial solution in the water so that they would be disinfected by the time we released them into the pond. 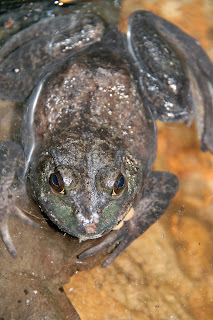 It was very cold for the next three days of their quarantine period.  Once I went out out to check on them and they did not move.  I poked them and they did not respond and I though they had died.  Sadly, I turned one over and it flipped its leg and tried to right itself.  I was so relieved.  They were simply in hibernation mode, unprepared as they were for the change in temperature from the meat department. 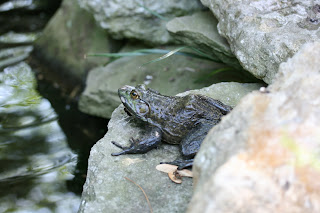 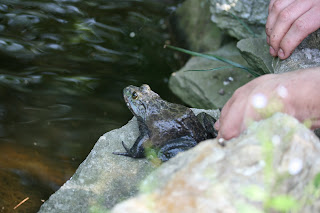 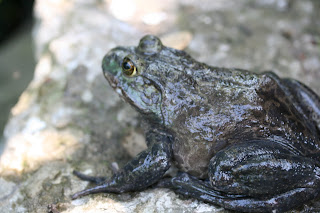 Finally the day came to turn them loose.  My son picked the first one up and put him on a rock that jutted out into the pond.  He just sat there.  We tried to coax him into jumping; poking him did not help.  My son gave him a shove and into the water he went, probably swimming multiple strokes for the first time since he was a very tiny frog back at the frog farm.  It must have been exhilarating for him.  We noticed the second one had a damaged eye, probably poked during his time in the meat department.  We went through the same routine with him, ending by pushing him into the pond. 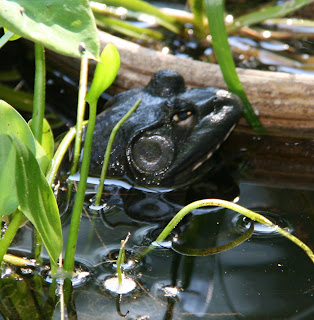 Since then we have never seen one-eye again.  He was the one who rarely surfaced during the isolation period so maybe he stays below the surface of the pond all of the time.  Or maybe a predator came at him on his bad side and took advantage of him.  But Lucky, the first to jump, is just about the happiest frog I have ever seen.  He has enough fear that he won't let you get close to him, but he has the guts to surface and float happily among the plants, head above the water, front feet resting on a plant or floating.  When startled he darts below the surface and swims quickly to the opposite side, making it there in only a couple of strokes. 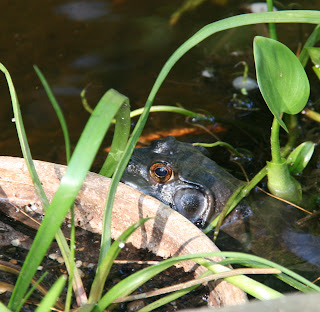 It must have all been so overwhelming for him at first, having never been outdoors and free to do what he wanted.  His legs seemed stiff and difficult to move, probably due to lack of use.  He seems to have regained his olympic swimming strength now.  He is a looker.  We think he is an American Bullfrog.   I hate to say it but as much as I think he is special, the pictures in the frog book look an awful lot alike.  But one thing is for sure, this is one lucky frog.  I just hope that he has sense enough to stay away from the hawks and owls and enjoys lots of mosquitoes and water bugs this summer.  It is a good life and I feel fantastic knowing that I was part of a successful liberation, for only $3.99 a pound!