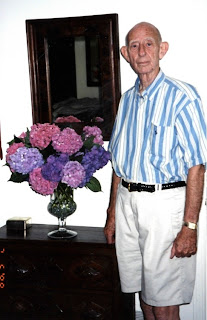 Father's Day makes me think about my own Dad who passed away early in 2002 after a stroke.
Here he is in 1998 at my house, about this time of year, after having arranged these beautiful hydrangeas for me.  My hydrangeas are just as beautiful this year and I am always reminded of him when I pick and arrange them. 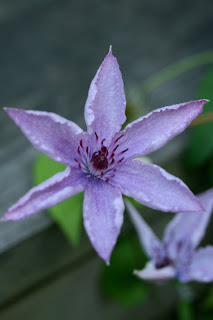 Dad loved flowers and on visits here in the spring he would go to the garden center and buy me a few treasures and plant them for me.  Here is one of the clematis that he planted.  It always blooms in May and June and usually has beautiful flowers on Father's Day. 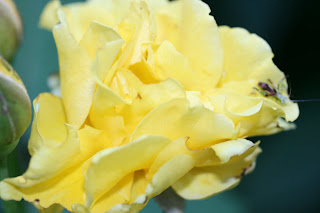 Here is a yellow rose on the bush I bought in Dad's honor on his birthday back in April.  The beetles are bothering it and the flower is nibbled a bit around the edges, but he would have loved it anyway and remembered that yellow roses are my favorite.

Dad loved my boys and spent quality time with them.  Here he is teaching Matt some manly skills. 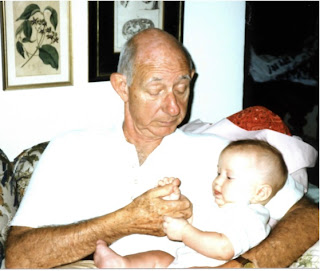 He was happy to hold my boys when they were babies as long as they didn't cry or have "messy pants."  When they had issues, he returned them.  I don't think he was much help to Mother with those things when we were babies, either.
Dad regularly told me he was proud of me.  What a feeling that was.  I miss that.  He was probably the last person who told me they were proud of me.  A kind word of praise can really turn a mediocre day around.
At dinner this evening, I remembered Dad in my blessing, and said that I hope he is helping the Lord watch over us.  We continue to need his guidance and remember the lessons he taught us.
Thanks Dad, for making me feel special.  This is your day and we all remember you fondly.

Sometimes A Thousand Words Are Better Than A Picture 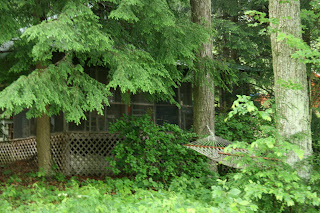 My brief Memorial Day weekend at our cabin in Kentucky was filled with memories and mental pictures I will carry with me for years to come.  I have been coming to this place since I was a child, and it just gets better.  Each visit is unique and builds on the last.  This one was no exception. 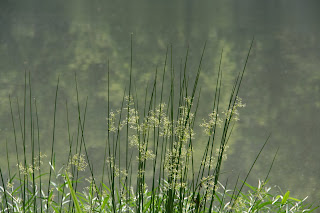 Sure, I took photos, but sometimes I didn’t want to be behind the camera but right there where things were happening to enjoy the full beauty, not the amplification by my zoom lens or the super closeness from the macro.  Sometimes it was better to just be there and take the photos inside my own head, processed and stored somewhere, retrievable without electricity, with my eyes open or shut.
Some things just can’t be photographed adequately, either.  Like the night my son, dog and I sat in the dark by the lake, watching the fireflies light up the fog rolling in and looking to the hills in the distance and where lightening was flashing around growing rain clouds, approaching very slowly.  It was a beautiful sight to see the jagged forks of lightening that looked like they were cracking open the galaxies beyond.  We sat in awe for a long time.  No camera could capture the sight nor the intimacy of sharing that time together.
Later that night the thunder, lightening and heavy rain reached our cabin and it was quite a storm.  At night there is no light at the lake and the lightening is the sole illuminator.  The rain pelting down on the tin roof makes quite a commotion.  Two lightening bugs found their way indoors and danced in the dark cabin, brightening the blackness with their un-choreographed etch-a-sketching. 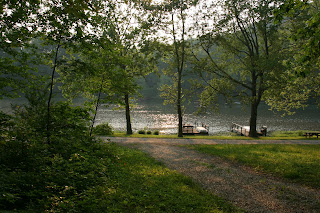 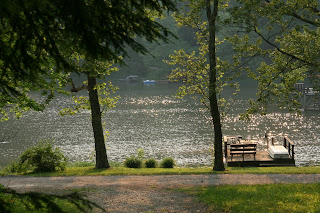 I tried photographing the view from our cabin in the early evening when the lake shimmers with the last of the day's sunshine.  It looks pretty in the photograph but it looks glorious in real life, as if tiny fairies are dancing along the top of the ripples of water, searching for something above or below, uncertain which way to go. 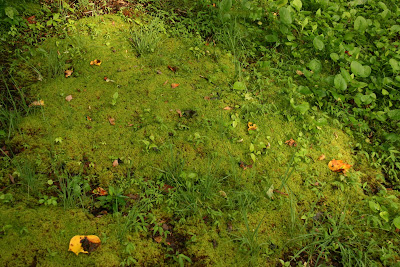 There is a carpet of moss next to the old sulphur spring on the opposite side of the lake from our cabin.  We always walk across the moss and go to the spring, checking to see how many frogs hop into the water as we get closer.  The moss is bright green and very soft.  I often reach down to feel it, or take off my shoes and walk across it, feeling the tickle between my toes and the soft dampness.  This photograph doesn’t capture the look or the feel of really being there.  My mental picture is far better; being there is just the best.
Nobody photographed it when my son put his arm around me and said “I love it here, Mom”.  That is my special mental picture, and Canon couldn’t beat that with the most expensive camera they make.  Nope, that memory is all mine.
When our aging yellow dog galloped in the grass and gleefully walked in the stream and drank the cool water on our first walk of the day, I didn’t have my camera.  It was great fun to see his old spirit and energy return for a short time.  Back at the cabin, he slept for hours in preparation for the next walk.  I’m sure his mental picture was of himself as a younger dog, enjoying all the sights and sounds of nature that are part of every day there. 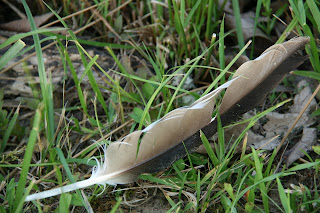 On a late afternoon walk, I found this lucky feather.  It felt like it had been put there especially for me.  I took the photo and never touched the feather, leaving it instead for the next person who might think it a lucky feather left there especially for them.  The photo doesn’t capture the beauty of the surroundings, nor the extraordinary spotlight of end of the day sunshine. 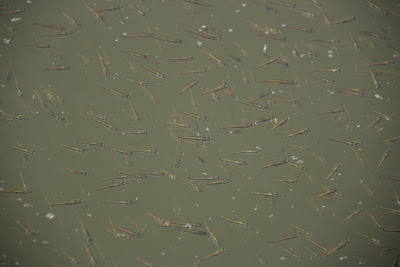 Thousands of newly-hatched bass swam in the still water at the end of one of the docks.  It was amazing to see so many, looking very much the same; but on closer inspection each had its own unique characteristics.  How amazing that they must have all hatched at once; and it was uncanny how they swam in waves, mimicking the movements of the adjacent brothers and sisters.  This photo does not show their synchronized swimming, nor the largess of the school. 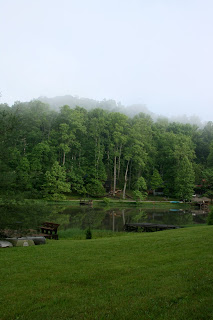 The air is damp and crisp on the morning after a storm.  When the fog finally lifts off the lake it looks like glass and reflects the trees and the other cottages and everything is still.  The scent is sweet and grassy and the birds call out to one another.  No camera could take it all in but the memories are vivid. 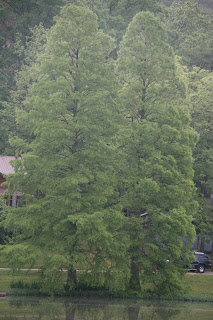 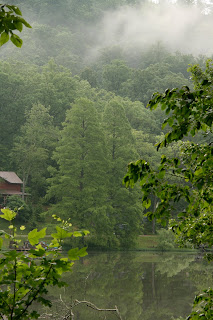 My Father told me the story about our relative who planted two cypress trees by the lake and was told that they would never survive that far north.  She has been dead for about 40 years.  The two trees, now some 40 feet tall, are thriving.  I told the story to my son again during the weekend.  He loves that story, as did I when Dad told me; I hope he tells his children too.  This photograph doesn’t capture the beauty of the trees, nor the tenderness of the storytelling, but you get a little glimpse. 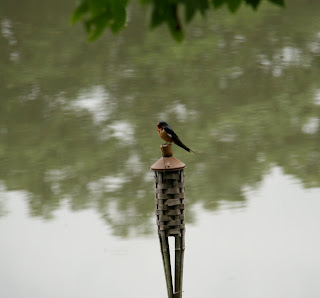 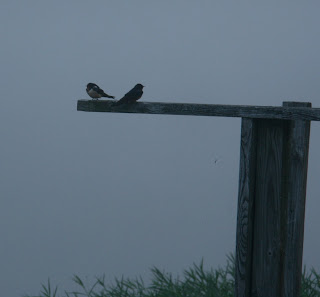 In May, the barn swallows are still tending their mud-caked nests under the docks around the lake.  They swoop about, guarding their new families and eating insects.  It is unusual to get more than a few second’s view of them, because they are always on the go and do not stop near humans.  I snapped two photos  of the birds at rest, with my zoom lens; I captured just a little bit of their beautiful colors and the serenity surrounding them.  They are too fast to capture in flight, and the photo would only show a split second in a larger panorama that only the eye and the mind can properly take in. 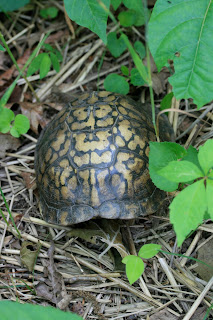 We rescued a medium-sized box turtle on the narrow country road leading up to the lake.  With nowhere to go but a steep cliff on the other side where he was headed, he was doomed and I decided to take him with us, barely a mile to our cabin.  There I turned him loose in the woods behind the cabin, free to wander back to his old turf or establish a new safer homestead.  He was a bright and yolky yellow with black.  His head and face were yellow.  I wasn’t able to get him to poke his head out for the photo and I left him to his business when I released him.  While in the car for those few minutes, he bravely wandered around the floor, searching for that place on the other side of the road where he was headed, clueless that he would have been flattened had he been under and not inside. 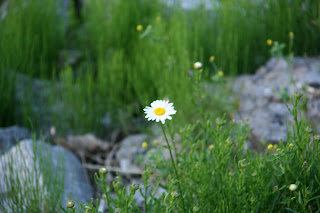 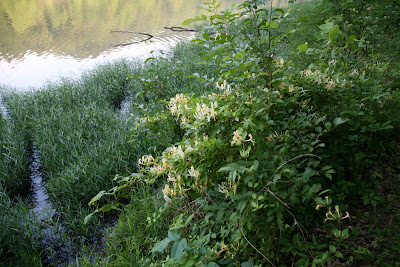 Wildflowers and the smell of flowers are just part of the lake's beauty in May.  Iris bloom at the shore, first the yellow and then the blues.  Honeysuckle is in the woods and beside the lake and the scent is everywhere.  How can you photograph the sweetening it gives to every cleansing breath you take? 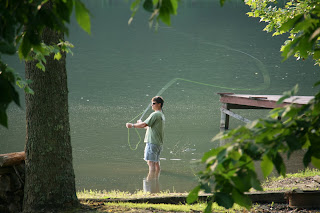 There is something really special about watching someone you love doing something they love.  My son loves fly fishing; this photo is of the first few minutes of the first day when the first thing he wanted to do was fish. 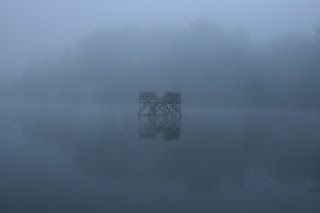 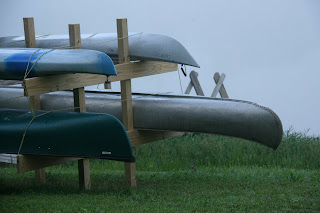 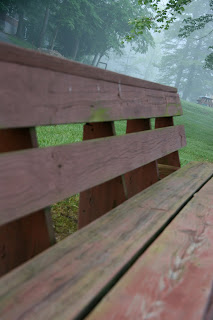 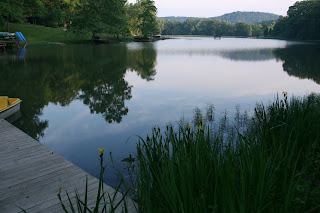 While I have collected some memorable photographs, the real memories aren’t digital but mental.  The sounds and the smells are etched in my brain along with the great conversation and the laughing and the jokes that nobody else would understand.  Memories are a gift and I just love making them.


It was a perfect place to spend Memorial Day weekend.  I have years of memories of friends and family who have shared this place with us; many of them are no longer with us but we remember them and our time together each time we return.
Posted by Pen and Ink at 10:57 PM 7 comments: